Queensland to restrict community rights to object to mining applications

Currently, any person or group can object and that can lead to the matter being heard by the Land Court. According to Deputy Premier, Jeff Seeney, that is “frustrating” for the government.

The Minister for Natural Resources and Mines, Andrew Cripps, has released a discussion paper for public comment. Submissions close on Friday 28 March. The discussion paper can be downloaded at http://mines.industry.qld.gov.au/mining/mining-lease-notification-initiative.htm

On releasing the discussion paper, Mr Cripps said “The proposed reforms will allow us to hear from those who are directly impacted by the development rather than extreme green groups in Melbourne or California whose life goal is to create a road block for economic development. These individuals or groups have little or no interest in our state and submit vexatious objections to tie up economically beneficial projects.”

Jeff Seeney told the ABC, “It’s obvious that the current process allows individuals or groups who are fundamentally opposed to the coal industry – for whatever reason – to use the objection process to frustrate and delay those projects,”
“The people of Queensland have elected us as a government based on developing our coal industry to supply the world markets and our processes need to allow us to do that.”

The Environmental Defenders Office Queensland has identified the issues and produced a summary of the discussion paper as well as a sample submission. They can be found at the EDO Queensland web site.

Prime Minister Tony Abbott has declared that too many of Australia’s forests are “locked up” and vowed to set up a new advisory council to support the timber industry. 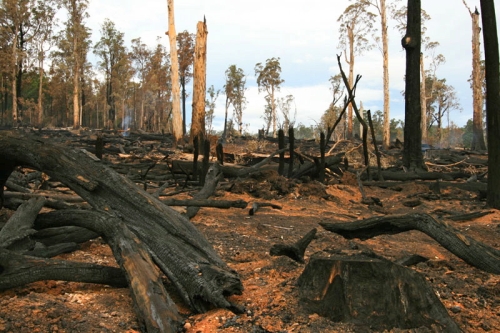 Speaking at a timber industry dinner in Canberra last night, Mr Abbott also recommitted to repealing part of Tasmania’s Wilderness World Heritage Area made under the forest peace deal.
His comments have prompted anger from the Greens, who have labelled him the “dig it up, cut it down Prime Minister”.
Under the Tasmanian peace deal, 170,000 hectares of forest was added to the World Heritage area.
The Government has formally asked the World Heritage Committee to delist 74,000 hectares – a position Mr Abbott reaffirmed last night.
“We don’t support, as a Government and as a Coalition, further lock-ups of our forests. We just don’t support it,” Mr Abbott said.
“We have quite enough national parks. We have quite enough locked up forests already. In fact, in an important respect, we have too much locked up forest.
“Why should we lock up as some sort of World Heritage sanctuary country that has been logged, degraded or planted for timber?
“Getting that 74,000 hectares out of World Heritage Listing, it’s still going to leave half of Tasmania protected forever, but that will be an important sign to you, to Tasmanians, to the world, that we support the timber industry.”
Mr Abbott told the dinner that Tasmania’s forest workers have a friend in Canberra.
“When I look out tonight at an audience of people who work with timber, who work in forests, I don’t see people who are environmental vandals; I see people who are the ultimate conservationists,” he said.
“And I want to salute you as people who love the natural world, as people who love what Mother Nature gives us, and who want to husband it for the long-term best interests of humanity.”
But Tasmania’s Deputy Premier, Bryan Green, says Mr Abbott’s approach to the issue is a step backwards for the timber industry, and a return to the logging war between activists and timber workers.
He told ABC Local Radio the best way forward is through the treaty struck by environmentalists and the industry – the Tasmanian Forestry Agreement (TFA).
“We’ve taken massive steps forward in this industry as a result of the TFA, we’re backing the TFA, we don’t want to return to the trenches,” he said.
“We want to continue to diversify the economy, we want to grow the forest industry based on the TFA as it’s established.
“I don’t want to return to the forestry debate that we had.”

Greens leader Christine Milne says the Prime Minister’s words send a clear message to the world “that Australia does not value its world heritage areas or its national parks”.
“People are going to be pretty upset that Tony Abbott is mounting this massive assault on the environment,” she said.
Any move to repeal the World Heritage classification on Tasmanian forests would ultimately prove destructive to the state’s logging industry, she added.
“Tony Abbott has got it so wrong. The logging industry was on its knees in Tasmania because around the world nobody wants to buy timber products that come from old growth forest,” she said.
“There’s now a high level of recognition that we need to be protecting the last of our primary forests around the world.”
Senator Milne said the recent peace deal with Tasmania’s conservation movement had given loggers “some chance of a future in the plantations”, but that Mr Abbott had threatened to “send Tasmania back to decades of conflict”.
“What he’ll actually do is destroy the forest industry, not to mention Tasmania’s clean, green and clever brand which is our main asset and that comes from our World Heritage area,” she said.
Mr Abbott also used his address to criticise the Tasmanian Greens for everything from the state’s ailing economy to its poor educational outcomes.
“We all know Tasmania has the lowest wages in Australia, it has the lowest GDP per head, it’s got the lowest life expectancy, it’s got the lowest educational retainment in the country and it’s got the highest unemployment, and funnily enough for the last eight years it has had a government in large measure dominated by the Greens,” he said.
While appointments to the new Forestry Advisory Council are still being finalised, Institute of Foresters national director Rob De Fegely has been named as co-chair.