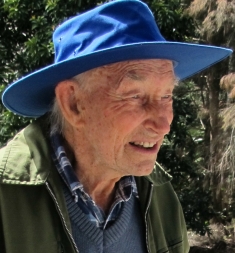 Geoffrey and his wife, Shirley, owned Ankida, the largest private property on Springbrook. In 2009, in an act of great generosity, the Millers donated the 210-hectare property to ARCS to ensure its protection in perpetuity.

Geoffrey was born in Sydney in 1926. He initially qualified as an electrical engineer, but after a trip to England exploring natural therapies, he began studies in medicine in Sydney and graduated in 1959. During his studies, he met and married Shirley Chatfield in 1957.

In 1969, Geoffrey and Shirley moved to Brisbane. They were looking around for land to purchase and from Beechmont they were able to see the Ankida property looking up along the Waterfall Creek valley to Horseshoe Falls and Springbrook Plateau above. Their decision was made and they purchased the property in 1971, naming it Ankida which in Sumerian means “where heaven and earth meet”.

Geoffrey established the Raphael Healing Centre at Ankida but also worked in cardiac rehabilitation at Tweed Heads Community Centre. He and Shirley later set up a practice called Health Options at Burleigh.

The Millers had taken up residence at Ankida in 1975 and Geoffrey continued his medical practice there with a strong focus on natural therapies.

Geoffrey was a central figure in the Theosophical Society and the Millers transferred part of their property to the Society leading to the establishment of the Theosophical Education and Retreat Centre at Springbrook.

Both Geoffrey and Shirley suffered falls and broken hips at Springbrook and in March 2015 they moved into an aged care facility in Mudgeeraba.

A wonderful memorial service was held at the Theosophical Education and Retreat Centre and the Chapel was filled to overflowing. Geoffrey was greatly respected and dearly remembered by many, many people around the country. The service was attended by ARCS President, Aila Keto, ARCS Secretary, Denise Elias and ARCS Director, Keith Scott.

Ankida is of outstanding conservation significance and ARCS regards it as a great privilege to have been made its custodian. The Society has received a bequest from the estate of long-time ARCS member and supporter, the late Jani Haenke, and has invested the funds in the Jani Haenke Ankida Preservation Fund to provide for conservation and management of the property into the future.

Horseshoe Falls on Ankida, the property donated to ARCS by Geoffrey and Shirley Miller