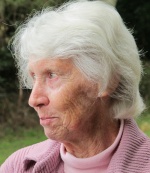 One of the very few people on whom ARCS has bestowed the honour of ARCAngel, Shirley Miller, died on 15 December 2016.

Shirley and her late husband Geoffrey donated their 210-hectare Springbrook property, Ankida, to ARCS in 2009.

Shirley and Geoffrey purchased the Springbrook property in 1971 but it was a few years later that they settled at Springbrook. They chose the name Ankida, derived from the Sumerian language — AN KI DA meaning Heaven Earth Meet. Shirley had an exceedingly deep love of nature and was committed to its protection and conservation. She gave a lot of thought to ensuring the long-term protection of Ankida and had the property declared a Nature Refuge under the Nature Conservation Act 1992.

Shirley was particularly concerned about the future ownership of Ankida and considered a number of options before entrusting it to ARCS, a decision for which we will be forever grateful.

Shirley was a gentle soul and lived her life guided by her self-determined principle, ‘do no harm’. Though gentle, Shirley could be very firm and she made it clear to Aila and myself that we must follow the ‘do no harm’ principle in our guardianship of Ankida.

Shirley and Geoffrey spent the last few years of their lives in an aged care facility at Mudgeeraba after they both had falls breaking their hips and being unable to continue living at Ankida. Geoffrey died in January 2016 and towards the end Shirley looked forward to joining him.